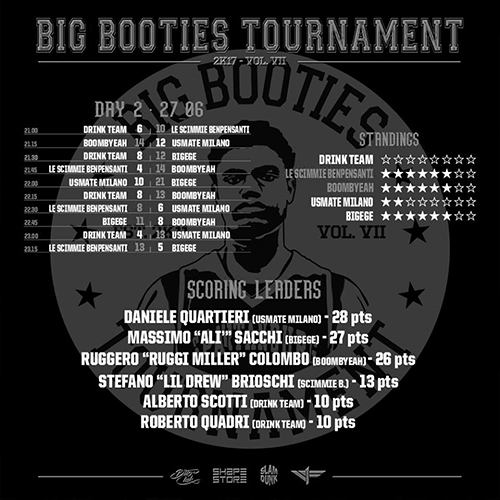 Time for the recap of DAY2, played on tuesday.

Awesome night also in terms of ball game, we witnessed some good teams and results speak for themselves: three teams are tied at six, and sadly we have to declare those who will access the Finals basing on scoring differentials.

The first seed goes to Ruggi Miller’s team BOOMBYEAH, that leads with a +7 differential. Second seed goes to team SCIMMIE BENPENSANTI, a.k.a. Scimmie 2.0 giving the fact that no veterans are featured in this year squad… Scimmie 2.o accesses the Finals with a +2 differential.

Ali’s team BIGEGE couldn’t make it to the Finals with a -5 differential, but we still have to mention them cause they played a fun brand of basketball, even though this isn’t something new as we know our man Ali and his game.

In terms of scoring leaders, Daniele Quartieri from team USMATE MILANO played an incredible DAY2 scoring 28 points (here’s a reminder… we go for 1 and 2s…). He made some amazing plays and it’s always fun to witness this kind of players on the blacktop. Then we have Ali, who finished DAY2 with 27, only 1 point shy from the leader, even if his performance couldn’t allow team BIGEGE to access the Finals. Ruggi Miller stands at the 3rd spot, scoring 26 points, you will be able to watch some of em in the highlight video on our official Youtube channel.

See ya next week for the hottest week ever… we will be with you for four days!